Lid I-5 Charrette Set for May 7 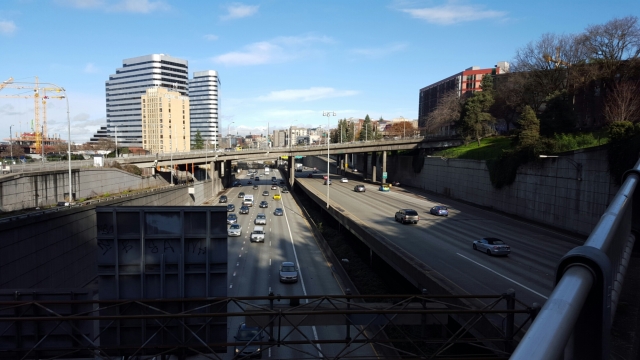 The Lid I-5 campaign is kicking into high gear with its first major public event scheduled for May 7 at Capitol Hill Housing. The event is open to the public, and people are encouraged to reach out to friends and neighbors to form design teams beforehand. Teams will arrive at 8am for an introduction to the vision of lidding Interstate 5, be provided background information, and set off for several hours of brainstorming, drawing, and mapping. The details are listed below.

I wrote an extensive report on this topic late last year. Since then, the campaign team has attended nearly a dozen public hearings and meetings and has met with local elected officials on the importance of lidding the freeway during an economic boom. New housing and commercial space is being added quickly to the Center City, but there is no plan to add a proportionate amount of open space to accommodate thousands of new residents and employees. The airspace above the I-5 canyon is the only place left in the core neighborhoods to add a significant amount of new parkland. Seattle and dozens of other cities around the nation have already done the same, and it’s time to do it again.

The event will bring together neighborhood residents and businesses, community leaders, and professional designers with the goal of demonstrating widespread support for closing the divide caused by I-5 in the Center City and beyond. This campaign is focused on the public’s ideas for improving the quality of life in the heart of Seattle. In addition, the event will collect feedback on what improvements are needed for existing parks and streets in the vicinity of I-5, Freeway Park, and the Convention Center to make them lid ready.

People who can’t attend all morning can drop by any time to participate in other ways and connect with Lid I-5 campaign volunteers. Some elected officials and representatives of community organizations will likely be in attendance. It is expected that design teams’ final pin-up and presentations will begin around 12pm.

The event will have light refreshments and drawing materials on hand. For logistical purposes the campaign team is requesting that all event participants RSVP via the online form below. For any questions or to get involved, contact mail *at* lidi5.org.

Like Loading...
This entry was posted in Editorial, Event Writeup, Lid I-5 and tagged campaign, charrette, event, information, Interstate 5, lid, lidding I-5, location, public, RSVP, Seattle, when. Bookmark the permalink.