The project to replace the Governor Albert D. Rosellini/Evergreen Point Bridge, the world’s longest floating bridge, is facing costly delays due to design and construction problems by WSDOT and contractor Kiewit. Now due to open a year and a half late by mid-2016, the $4.25 billion project will replace the 7,500 foot span across Lake Washington between Seattle and Bellevue with increased traffic, pedestrian, transit capacity. The 1963 structure is part of State Highway 520 and an integral connection between communities in western Washington, but delays have contributed to safety concerns and excess costs.

WSDOT has been planning a replacement for the aging bridge since at least 1997, when it first starting funding the project. The state legislature has allocated up to $4.65 billion for the project and about a quarter of that has been spent so far, and repairs on the floating pontoons are eating into a $250 million reserve fund. Another $1.5 billion for replacing the western landings in Seattle remains unfunded. WSDOT is studying alternative funding options, like federal grants; Rep. Ed Orcutt (R-Kalama), on the State House Transportation Committee, says, “If they want a gas tax…they’ve got to get things right. They’ve lost a lot of trust.” Time-variable tolling on the existing SR-520 bridge began in 2011 to help fund the project, and will continue on the new bridge until at least the 2050s.

The current bridge is structurally deficient, having had many repairs and seismic upgrades in recent years, and faces safety and congestion issues. It carries about 115,000 vehicles per day, but high winds and drawspan openings for boats regularly force the closure of the bridge and stop traffic. In 1989, an accidental opening killed one driver and injured several others. In 2000 a tugboat collision caused $250,000 in damage. In April a drunk driver made a U-turn on the bridge and killed another driver in a head-on crash, and in June an unknown vessel severed one of the underwater anchor cables.

Diagram of the widest scenario. (WSDOT)

The new bridge, located just north of the current one, will be almost twice as wide as the current 60 foot design, have two travel lanes and a HOV lane in each direction. Design features include a wider pedestrian path that will feature five projecting observation points, and four ‘sentinel’ tower-like structures will indicate the transition between bridge piers and the floating foundations. The boat clearance under the eastern landing will be higher, at 44 feet, to match the Interstate-90 bridges. The floating portion will consist of 77 concrete pontoons, built in Aberdeen and Tacoma and some of which will be 360 feet long, and as of this posting about 30 are in position on the lake. Possible future upgrades include replacing the HOV lanes with a Sound Transit light rail route, or adding rail in addition to all six lanes. Such retrofits would require additional support pontoons, environmental reviews, and planning work that would take up to two years; in regards to funding, a recent initiative that would have prohibited paying for light rail with bridge tolls was defeated by Washington voters. Other challenges to the project have been physical rather than fiscal.

The contract for the pontoons was awarded in February 2010 to Kiewit Construction, which has experienced a series of problems since then. Last year a KOMO 4 News investigation found Kiewit workers openly (and illegally) drinking alcohol at the project office in Bellevue, and later in 2012 KOMO also reported on widespread cracks in all six of the first pontoons that were built in Aberdeen. Other problems identified by inspectors included water leakage, missing, undersized, and rusting steel rebar, and improperly cured concrete. Kiewit denied there were any problems, but WSDOT’s own engineers confirmed the findings in an internal audit. In February WSDOT admitted their own design was to blame, and KOMO won a court ruling that required the agency to make public the estimated repair cost of over $80 million; this includes repairs to the first pontoons, and adjustments to the second set of pontoons being built at the time. Former State Transportation Secretary Paula Hammond said, “The results of our internal review show that we did not follow standards of good practice to validate the pontoon design elements…we also did not strictly follow some of our protocols for oversight and administration of the contract on the construction site.” Kiewit actually earns an extra $90,000 per day due to the delays, cumulatively costing taxpayers millions of dollars. The state responded by firing some bridge division personnel and adding new oversight. 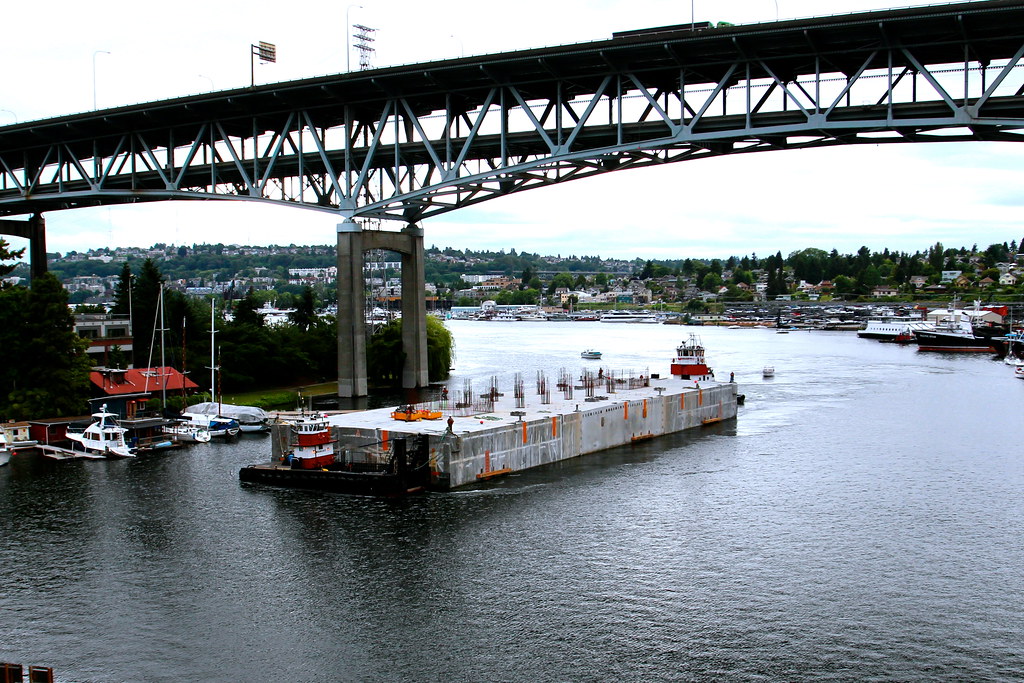 One of the longitudinal pontoons is floated through Portage Bay on its way to Lake Washington in June. (WSDOT)

The third batch of longitudinal pontoons is now under construction, presumably with the modified design assuring protection against a ‘1,000 year earthquake’ and 89 m.p.h. winds.  Blame lies with the rushed contract and schedule by WSDOT, and Kiewit also failed to adequately report and repair the construction problems. Apparently the design flaws would not have posed an immediate risk of catastrophe, but they would have significantly lessened the bridge’s lifespan. Though Washington is already home to some of the world’s longest floating bridges, the difficulties experienced by the SR-520 project reflect past troubles with both the Hood Canal Bridge and one of the Interstate-90 bridges. For a project that is already costing billions of dollars, it is best for future taxpayers that the repairs are made now rather than later. Stay tuned to this space for future developments on the project.