A study published this summer by the MIT Laboratory for Aviation and the Environment quantifies the startling health impact of air pollution on Americans’ health, finding that about 200,000 people die per year a decade before they otherwise would have. The leading causes are road vehicles and electricity generation, making the case for cleaner power and transportation all the more pressing. 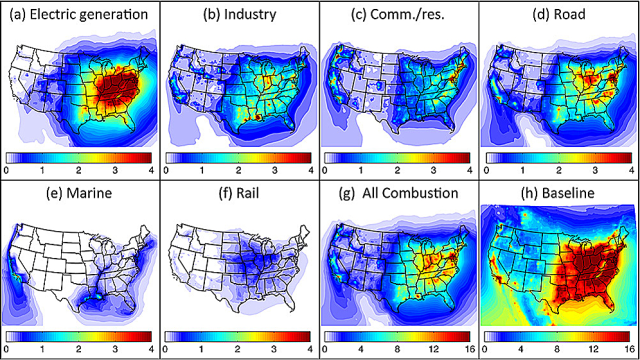 According to MIT News, researchers led by assistant professor of aeronautics and astronautics Steven Barrett conducted the study by overlaying EPA emissions data on population-density maps. They broke the emissions into six categories; electricity generation, industry, commercial/residential, road, marine and rail (for an aviation lab, an aircraft category is inexplicably absent). The study identifies exhaust from cars and trucks as the largest contributor, accounting for 53,000 premature deaths per year. Electricity generation is a close second at 52,000 deaths per year, and industrial pollution causes 41,000 deaths per year. The deaths are linked to fine particulate matter that is emitted from tailpipes and smokestacks, which is linked to lung cancer and many respiratory diseases.

The study’s abstract says, “The results are indicative of the extent to which policy measures could be undertaken in order to mitigate the impact of specific emissions from different sectors — in particular black carbon emissions from road transportation and sulfur dioxide emissions from power generation.” The EPA has had similar findings, and the effects of pollution have been known for decades, so this additional scientific evidence should spur changes in industry and business. But this is also a global issue; pollution and ozone cause nearly 2.5 million deaths per year worldwide, with Chinese citizens making up almost half of that; that certainly bolsters the argument against exporting carbon from the U.S. to Asia.

Emissions are also a known factor in climate change, but the fossil fuel companies are not concerned with that either. It is clear that decisive leadership is needed among politicians, industry leaders, and even common people to reduce emissions and invest in alternative energy technologies. For two and a half million people every year, change cannot come soon enough.