For a little break from the Northwest we venture to the nation’s capital in the other Washington, where an exciting urban design project is under construction. On a 10-acre megablock previously home to a convention center, the CityCenterDC project will create new living, lodging, retail, office, and public space. I had the unique opportunity to hear from the project designers and developer at an architecture student conference in D.C. in July. The project is unique in its scale and ambitious intention to increase pedestrian liveliness in the city’s downtown.

Due to open later this year only five blocks from the White House, the project offers 674 living units, 350 hotel rooms, 295,000 sqft. of retail space, 515,000 sqft. of office space, and over 1,800 underground parking spaces. It is a large undertaking that has been in the works since 2000, when then-mayor Anthony A. Williams created a task force to redevelop the site. The early vision included a new major attraction such as a theater or museum or even a baseball stadium, but a number of delays and political conflicts caused the programming to change throughout the decade. In 2004 the convention center was imploded and the site was paved with a temporary parking lot. The bid ultimately went to Hines Interests, an international development firm, and the concept eventually became a space that will be central to the city’s downtown.

Early designs intended the entire megablock to be pedestrian-only, but later 10th St. and I St. were planned to reconnect and create smaller blocks. The city retained a northwest parcel for a public park, and a separate office building will be built on the unoccupied northeast corner.  The focal point of the project is the central plaza between all of the residential buildings. The lead designers, Foster and Partners of Britain, are aiming to earn a gold LEED Neighborhood Development certification; this is to be achieved through high-density 12-story buildings, locating close to Metro train stations, orienting buildings towards the sun for daylight and passive heating, vegetated roofs, and recycling 100 percent of water used on-site.

The narrow pedestrian alleys are supposed to evoke human-scaled European streets, and slight adjustments in facade materials and positioning will give the impression that construction happened at different periods while retaining an overall unity. These design features have been criticized as going against the original L’Enfant plan, which has wide streets and large gathering spaces for public use. However, the design does incorporate trees, lighting, and other features that are similar to the surrounding neighborhood in an effort to blend in. The facades facing the site perimeter are fitted with precast concrete panels to breakup monotonous curtain walls. The upscale living units are also designed to provide isolation from the urban hubbub below; some of the units are adjacent to the roof terraces that will allow for living rooms to spill outdoors.

Living units with shared balconies have a metal grille between them to provide some privacy. While each of the six main buildings will have ground-floor retail, it will take a few years to see whether the intimate spaces between the buildings become the domain of the public or are left to the high-spending residents. A Neighborhood Advisory Commission member noted during early phases of development that such public spaces in D.C. are often taken over by skateboarders and the homeless. 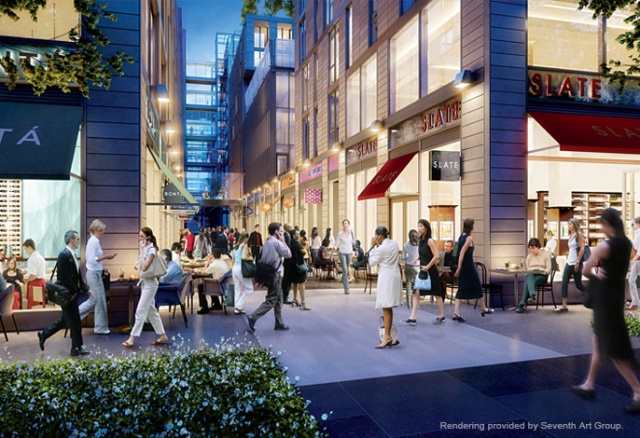 Rendering of a pedestrian street. (Foster and Hines)

While CityCenterDC took years to get off the ground, it is noteworthy for its unique design and efforts to incorporate sustainability features in such a large project. As other sites around in American urban cores, such as industrial brownfields, parking lots, and dilapidated buildings, become available for redevelopment, this project sets a high-standard precedent that could be a guiding principle for mixed-use and environmentally-mindful communities.