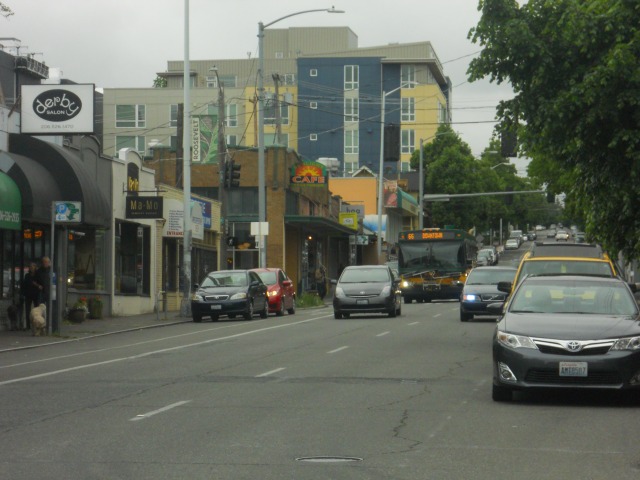 Roosevelt Way NE is just one part of the corridor being studied. Photo by the author.

The Seattle Department of Transportation (SDOT) is studying options for transit improvements in the Roosevelt corridor between Downtown and Northgate. Although Sound Transit is currently building Link light rail in the same area, the City’s Transit Master Plan (TMP) identifies this parallel corridor with high ridership potential. It includes South Lake Union and Eastlake, which Link will not serve. At a project open house last week, SDOT staff and their consultants from CDM Smith presented background information and early thoughts on speeding up transit service between these growing neighborhoods.

Seattle’s most recent TMP was adopted in 2012. It identifies high capacity transit (HCT) corridors that serve, or have the potential to serve, the greatest number of people, the greatest mix of land uses, and provide the highest quality of service. HCT corridors were also evaluated based on social equity, economic benefits, and neighborhood connections. The TMP makes additional recommendations on land use integration and access to transit.

The corridor being studied. The blue line (added by the author) shows the future Link route and stations. Click to enlarge. (SDOT)

The study area is long, stretching 7 miles miles. It connects a variety of neighborhoods and business hubs. From the south it starts in Downtown at Westlake, a major transit hub and commercial center. It then moves through the growing and congested South Lake Union area, where 22,000 new jobs and 12,000 new households are expected by 2031. Next is the constrained Eastlake neighborhood with only one arterial street. It then crosses into the University District on the Roosevelt/11th Avenue couplet; here 5,000 new households and 4,800 new jobs are expected by 2035. Moving through the Roosevelt and Maple Leaf neighborhoods, the route shifts to 5th Avenue NE and terminates at the Northgate transit center. Northgate is being planned for up to 4,000 new households and 10,000 jobs by 2030.

95,000 people currently live in the corridor (defined as a half mile from the route), and 29 percent of households have no vehicle (compared to 8.5 percent citywide). Data from the 2013 American Community Survey shows wide variability in driving and taking transit to work, with driving predominating north of NE 85th Street. Providing more robust transit will likely encourage people to switch from driving and better serve those who already don’t have cars.

SDOT is considering two alternatives for the type of vehicle that will be used. One is bus rapid transit (BRT), which is a bus service that can compete with the speed of driving. This is primarily done with bus-only lanes, having passengers pay their fares before they board the bus, and giving buses traffic signal prioritization. King County Metro has implemented “BRT limited” with six RapidRide routes throughout the county; the biggest missing piece is typically bus-only lanes.

The other option is rapid streetcar, which besides being on rails otherwise has the features as BRT. No such systems exist in the United States, but the TMP heavily leans toward it: One strategy statement is: “Fund and conduct an alternatives analysis study to confirm rapid streetcar as the preferred mode and to position the project for federal funding.” The federal government has been happily funding new streetcar systems across the country, and is expected to fund much of the Center City Connector streetcar construction on 1st Avenue.

Comparing the two mode options. Edited by the author. Click to enlarge. (SDOT)

However, at the open house last week, staff indicated at this early stage BRT is already  the preferred mode. This is likely because of the much higher capital costs of what would be an extremely long streetcar line. There is also potential conflict and incompatibility with the existing South Lake Union (SLU) streetcar route at the southern end of the project area; if the two lines connected, travel times would be dramatically slowed where the SLU line operates in mixed traffic with cars; fortunately, part of this problem will be resolved with new transit-only lanes on Westlake Avenue. But the SLU line also has tight turns and short stations that would may not fit longer, faster streetcars. On the other hand, if the lines don’t connect there is a potential for passenger confusion and redundancy with overlapping rail service in the same area.

Regardless of the final alignment, improvements will be needed for transit operations on Fairview Avenue at Valley Street and Mercer Street. This pair of intersections has poorly timed signal phases that currently delay buses and the SLU streetcar. It can take upwards of five minutes to go less than a quarter mile.

There appears to be some minimal level of coordination with Metro’s route restructuring around the U-Link opening happening early next year; Metro routes 66X, 67, and 70 currently serve the Roosevelt corridor. The 66X is proposed to instead run on Interstate 5 and be peak only; the 67 is proposed to be rerouted from 5th Avenue NE to Roosevelt Way NE, and then from the Roosevelt couplet to University Way and the UW Link station; and the 70 is proposed to have no route changes. However, there is no firm deadline for implementing this HCT project; it could be constructed before or after Northgate Link opens in 2021.

The alternative shown on the open house maps has the HCT line terminating at the Westlake transit hub, like the SLU streetcar, but it takes a different route via Fairview Avenue and loops to 5th Avenue via Stewart and Virginia Streets. 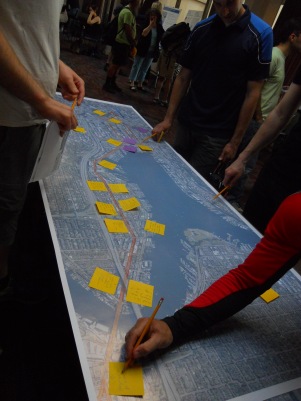 Community members post notes on a map of the project area at an open house. Photo by the author.

If BRT is ultimately preferred, the line should go beyond Westlake to provide the most utility to people traveling to Downtown. Indeed, the TMP recommends this: “Conduct a detailed study of terminus locations, including…development of a southern terminal that is integrated with the International District Station and does not require transferring passengers to cross a major arterial street.” A terminus at the International District-Chinatown transit tunnel station would eliminate transfers to get further into downtown, and it would provide a connection to the King Street rail station.

The project will likely involve the complete redesign of streets, including bus islands and sidewalk extensions. The Bicycle Master Plan also designates most of the route for new protected bike lanes. With limited right-of-way and transit-only lanes,  parking lanes and general traffic lanes will probably need to be removed or converted in order to meet the City’s complete streets policies. Traffic volume data shows this could be done without adverse impacts, and it would calm traffic and boost business in these neighborhoods. 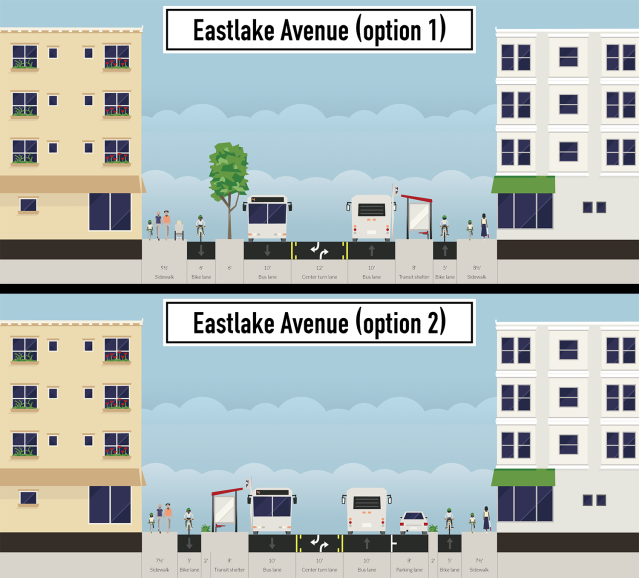 Two possible options for complete streets on Eastlake Avenue, without transit-only lanes. Images generated by the author at streetmix.net.

Staff will be analyzing public feedback and the alternatives through the summer. A locally-preferred alternative will be announced in November. A conceptual design is scheduled for release in February 2016. For more information and to give feedback on the Roosevelt HCT project, check out the SDOT website and the open house posters (12 MB PDF).