The Case for Cities and Saving the World

The Urbanist, a new Seattle-based website, offers compelling reasons for channeling human activities and development into cities. I’d like to add to their argument: cities are how we’re going to save the world. As developing countries rapidly catch up with industrialized standards of living we have an opportunity to simultaneously improve quality of life while combating climate change, and skip the dirty, ugly stages of development that have been characteristic in much of history. We can’t wait any longer to change for the better.

Cities offer a number of benefits that have already been covered in this space, and which I am sure you are familiar with. In recent years the discourse on ecological stewardship has picked up steam in the U.S. and elsewhere. Media coverage, education, and research programs are helping us understand the impacts of our actions on choices on everything from landfills to water supplies. And more people are realizing that living in cities has environmental benefits, including less energy and resource usage, among the social interaction and economic mobility that you can’t find elsewhere. In short, thanks to a variety of factors we are seeing a slow reversal of suburban sprawl.

Sprawl’s definition has been debated, but you know it when you see it. In a nutshell, sprawl is low-density development, segregated land uses, and auto-dependent street networks. It’s not just an American phenomena, either, because it has been seen in metropolitan regions around the world for centuries. But it is has been helped along by our dependence on technology, namely the car, and corporate propaganda that has proliferated since the mid 20th century. The health effects of suburban living have been well documented (PDF), and include obesity, social isolation, and air and water pollution. These are direct results of eliminating walking as an option to do, well, anything. People are forced into their cars just to buy food and get to school or work, and this requires a massive amount of paved surfaces that have been growing at an alarming rate of 1 million acres per year. The huge homes and travel distances associated with this also result in a stark contrast between the carbon emissions of urban and suburban dwellers. 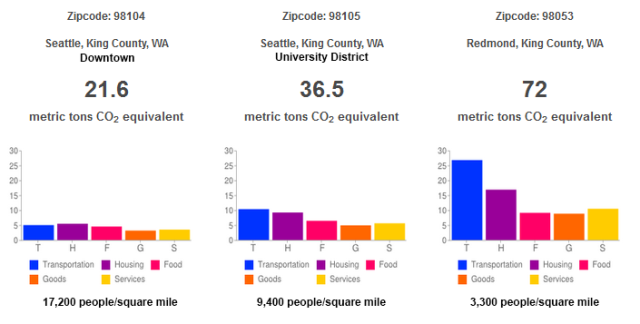 UC Berkely recently compiled data on emissions by zipcode. In Seattle’s U-District, where I live, the average is 36.5 metric tons of CO2 per year per household. In Downtown it’s even less, at 21.6 metric tons. Just across Lake Washington in Redmond, a classic suburban city, that number is more than tripled at 72 metric tons. It is obvious that the starkest contrast is between housing and transportation. In denser cities and neighborhoods people live in smaller units and need less energy for cooling and heating. Shopping and jobs are closer and can be reached by transit, which has less per-person emissions than cars, or by foot and bicycling, which have no emissions at all (trolley buses and streetcars powered by hyro, wind, solar, or nuclear also zero emissions).

Let’s do some math. Rolling Stone summarized the implications of continuing to rely on a fossil fuel economy: a mean global temperature of 2° Celsius is the threshold of irreversible climate change (we’ve increased 0.8°C so far) and humans can only emit 565 more gigatons of carbon dioxide before passing that point. If the entire world population lived like Redmond does, then we would blow past 565 gigatons in just one year. If the entire world lived like Downtown Seattle does, we’d pass the mark in about 3.5 years, which isn’t much better. Most of the world isn’t wealthy enough to live like Seattle cosmopolitans, of course; global annual emissions are around 37 gigatons, which will put us past 565 in a scant 15 years. Stalled progress in international emissions reductions and slow adoption of clean energy sources now present the question of how to reduce the inevitable overshoot of 2°C.

Adaptation and resiliency against the changes to come are now critical. But it is obvious we need a combined approach that also curbs emissions and reduces the extent of the damage. The best way to do this is by simply densifying the world’s cities. Suburban development needs to be discouraged and governments must continue to focus private and public investment in urban centers. I do not advocate replicating China’s social engineering route in which people are physically forced from their rural homes. Rather, growth management, upzoning, tax incentives, and other planning tools are going to play a large role in this. I’m also not saying that small towns should be ignored; historically, small towns have been completely walkable and pleasant to live in, and that trend can be revived with influence from New Urbanism. Walkable urbanism can also compete against drivable suburbanism with advertising and marketing.

In many existing cities, like in Europe, eastern Asia, and the American Northeast, it is possible to live without a car while having access to all of life’s amenities, and suburban cities can be retrofitted to be do the same. We need to preserve land for food production, timber harvesting, ecological systems that clean our air, water, and soil, and of course the recreational assets. There are indeed some problems associated with urban living, such as crowding, noise, and mental health, but we should take those as challenges to design better and design for people. We must build at a human scale:

Now buckle down and stay with me here, because there is a bigger reason for all of this: we need to make sure Earth remains habitable long enough for a few of us to leave. Humanity’s existence is in peril if we continue to keep all of our eggs in one basket. Whether it happens 100 or 10,000 years from now, an asteroid, global pandemic, nuclear winter or some other catastrophe that has happened before will happen again. Delaying the devastating effects of climate change will buy time to develop the technology needed to colonize other worlds. Think of it as planetary insurance!

This has always been humanity’s driving impetus: expand, conquer, reproduce. It’s still happening today in modern countries. It is the purpose of civilization. What is our end game if not to assure our dominance over the cosmos? Luckily, some of the world’s brightest scientists are on this track and we are due for a manned mission to Mars within 20 years. Private companies are forming to mine asteroids for rare ores, and maybe, to someday built interstellar craft in orbit. We are discovering hundreds of exoplanets every year in the search for Earth 2.0. Elon Musk, founder of Tesla Motors and SpaceX, is emerging as an advocate for the long view: “A future where we’re a space-faring civilization is a far more exciting and inspiring future than one where are not”.

And what if it’s all for naught? Improving cities with clean air, renewable energy, an abundance of parks, electric transit, and social programs wouldn’t be for nothing. The goal towards making the world a better place to live is an end in itself. With hundreds of millions of people moving to cities during this century and the next, we can make urban living better than any other option. Although the long view is important, achieving such lofty goals requires precise, calculated steps on a daily basis and at the level of lots, blocks, and streets. Let’s improve our neighborhoods and cities in new and unique ways. This is why I want to be an urban designer and why I am passionate about the built environment. But I’ll be keeping an eye out for that first Martian planning job posting.

1 Response to The Case for Cities and Saving the World