A sea of empty asphalt in suburbia.

In the postwar decades of the 20th century American cities stood by their carefully calculated minimum parking requirements, resulting in underutilized land and encouragement of car travel. Planners outside of the largest cities have started to reverse this trend by reducing parking requirements, setting maximums, or not allowing any parking at all for new residential or commercial development. And, surprise, the world has not ended. As the affordability of housing lessens and alternative transportation improves across many of the nation’s metro areas, it makes sense to take a second look parking standards.

An example of typical suburban parking standards comes from  Kent, Wa., where I recently did a neighborhood study for a planning class. Retail stores and supermarkets there are required to have one parking space for every 200 square feet of floor area, or five parking spaces per 1,000 square feet. Multifamily developments up to 49 units need two parking spaces per dwelling units. With a standard space at 153 square feet, about the size of your bedroom, in addition to aisles and driveways, this quickly adds up to huge areas covered by hard surfaces. The environmental impacts from surface parking, including polluted stormwater runoff and the heat island effect, are well known. And as a result of these policies, Kent and many other suburban communities have an abundance of underutilized lots. Big boxes stores are usually happy to comply with these requirements in anticipation of Black Friday, the busiest shopping day of the year, but even then it is clear that commercial parking lots are oversized; a social media campaign brought in many images of half empty lots this year.

Larger cities are also guilty of excessive parking; the Puget Sound Regional Council recently released data indicating Seattle’s downtown off-street parking is only 50 to 70 percent full at peak times. However, the city’s new on-street pricing system has been successful at maintaining high occupancy without causing congestion by charging $1-4/hour depending on location and time of day. The 2012 American Community Survey revealed that Seattle is now one of a few cities where less than half of residents get to work by driving alone. Clearly, more parking is not necessary even in growing cities like Seattle.

The city is also partnering with private garages to show where parking is available and reduce congestion. Real time at seattle.gov/epark.

Conversion of parking structures and redeveloping surface lots will become more common in the years ahead, but planners also need to realize that parking requirements for new projects drives up rents. The Sightline Institute has released a report (PDF) on its survey of multifamily housing in King County, finding that 37 percent of spaces were unoccupied (at my own building in the University District only seven of nineteen spaces (37 percent) are used). Even for the 20 percent of dwelling units with no car owners in the county, tenants may pay up to $246 more per month than if no parking existed. This is because developers want to recoup the loss of rentable square footage and landlords need to maintain expensive asphalt and concrete. Also, for skyscrapers, the construction cost of sub-grade parking is enormous; another post from Sightline illustrates how parking minimums cause rents to skyrocket by reducing buildable space. These economic realities exacerbate the growing shortage of affordable housing in America’s large cities. 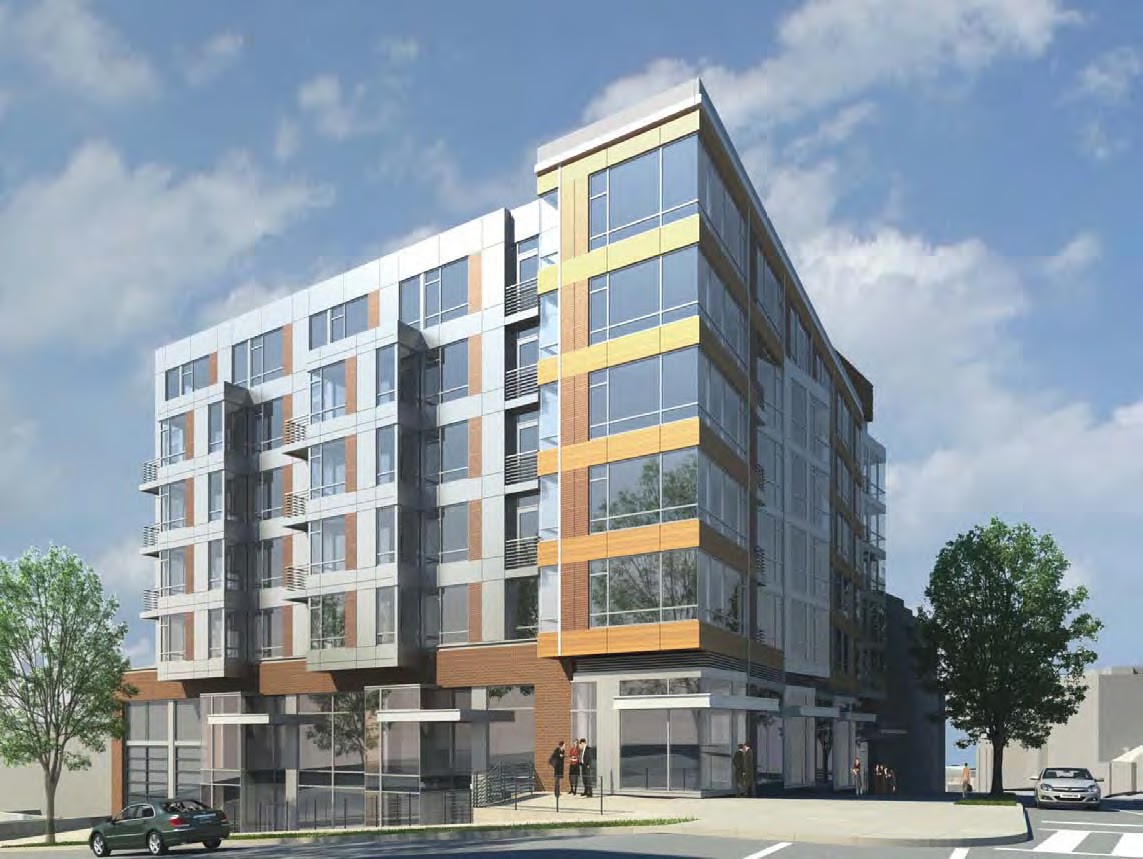 A proposed apartment building without parking in Washington, D.C.

There are examples of successful parking-free development locally and nationwide. Since Seattle eliminated parking requirements for low-rise multifamily zones in 2010, which cover about 8 percent of the city, Streetsblog reports some 30 projects have been built without it. In South Lake Union, one of Seattle’s dense “urban villages” where parking minimums were also dropped in 2012, a developer plans a 283-room hotel without parking. Boston recently approved a zoning variance on a 175-unit condo building because of its proximity to walkable amenities and transit. In Miami a 352-unit condo tower will have five Car2Go stalls and a bikeshare station rather than a parking garage. And much of Portland’s apartment construction has had no parking over the last few years, though recently the city council returned minimums to large projects after neighbors complained of crowded street parking.

With downtowns being revitalized and younger Americans driving less, alternatives to urban parking minimums are abundant. Parcels near frequent transit service can be zoned with maximum or no parking requirements and zoned as mixed-use with ground floor retail instead of ground floor parking. This would not only increase density and use land more efficiently, but also contribute to walkable neighborhoods. Another option would allow for some parking if the developer partners with a car-sharing service like Car2Go or Zipcar to provide a few stalls for rental vehicles. Requiring indoor bicycle storage for residences and secure parking at businesses would also help. In the long term, cities can decrease the need for parking by improving pedestrian and bicycle infrastructure between residential and commercial neighborhoods, along with shifting funding from highway and road construction to maintenance and improved transit service.

Cars will never completely disappear, nor should they. I myself love to drive around town and out to the wilderness for skiing or camping occasionally. Vehicles are now irreplaceable for distributing freight and food, collecting our garbage, and providing emergency services. But planners, developers, and residents are learning that private cars do not to be accommodated when cities are designed for getting around by foot, bike, train, and bus.