The Washington State Senate Transportation Committee hosted  a “listening forum” in Seattle on Monday to hear out citizens on transportation issues, and the main topic was the impending funding cut to the King County Metro bus system. With several hundred in attendance, people from all walks of life spoke and gave a collective impression of just how critical public transit and transportation funding is to the millions of people in the Puget Sound region.

The Situation
Metro is managed by the King County Department of Transportation and operates some 1,400 buses on 217 routes. It is a sub-regional service that covers much of Seattle and connects other major cities within the county, and with 115 million passengers in 2012 Metro is the nation’s ninth largest transit system.

Metro started facing its serious financial woes in 2008 with the onset of the recession. 60 percent of funding comes from sales tax, and that significantly declined with the economy. The agency undertook many cost saving measures and increased fares to balance its budget. The King County Council also approved a temporary two-year ‘congestion reduction charge’ of $20 for car tab renewals, but when that expires in mid-2014 Metro will have an annual $60 million funding shortfall. This will force a 17 percent service cut, cancelling or reducing many bus routes. This will cause longer walks to bus stops, more crowded buses, and more congestion as people opt for cars.

At issue with the state legislature is King County’s lack of alternative funding options, which could include new authority to charge licensing fees or seeking voter approval of a local vehicle excise tax. At Monday night’s hearing, blue-collar types and city officials alike demanded legislators do something that would absolve the crisis. With over 2 million people, King County is undeniably the economic engine of the region and worth supportive efforts by the state.

Public Testimony
The public forum started with brief introductions from committee co-chairs Tracey Eide (D-30th District) and Curtis King (R-14th District) and Washington Transportation Secretary Lynn Peterson. King County executive Dow Constantine was one of the first to testify, noting “We must invest in our transportation, and we must do it now”, and added the end of temporary funding next year will add 30,000 cars to the region’s roads. 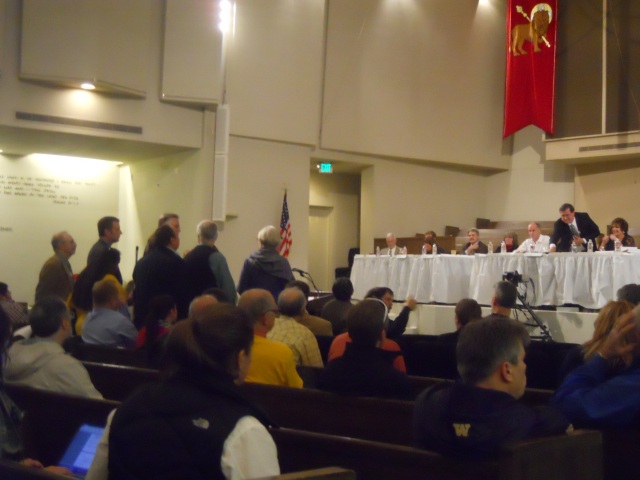 People line up to testify.

A representative of Washington State Ferry riders noted that the system is the state’s number one tourist attraction, and should be exploited to ease fare increases and crew shortages. A Seattle council member focused on traffic congestion, explaining that even a short 24-hour delay for containers at the seaport will force shippers to consider other routes. A King County council member noted budget cuts will allow only 10 percent of the county’s roads to be plowed this winter.

The Transit Riders Union, representing many low-income and working class people, had a prominent showing, and one representative said of self-sustaining funding, “We need it, and we need it soon. Not another band-aid measure”. A Metro bus driver discussed the lack of safety and security protections since last August’s downtown shooting and not even after the murder of a driver 15 years ago. The driver also noted the effects of staffing shortages and reduced breaks for drivers on service.

A bicyclist noted that bike routes can easily reduce congestion at much lower costs than adding new lanes (which actually increase traffic), and what are really needed is bike lanes separated from vehicles. He and many others argued that an increase in the state’s gas tax, perhaps up to 30 or 40 more cents per gallon, is critical to maintaining current infrastructure and providing alternative transportation. Related, other people decried the state’s toll lanes as an unequal solution for congestion that is biased against the poor, and also suggested more subsidized fares for low-income, youth, and homeless riders.

There were also a variety of business interests present. Representatives from two aerospace companies spoke to the need for increased freight mobility, and an eastern Washington farmer criticized the slog of Interstate 90 from Issaquah to Seattle despite its importance in carrying billions of dollars worth of commerce every year. Similarly, several mayors and city council members spoke to the need for the state to finish highway projects it started but stalled on, such as SR-167 and SR-522. The director of transportation at the University of Washington noted that of the 65,000 people who visit the Seattle campus every day, the vast majority of them prefer transit, biking, and walking to driving alone. Also, several parents testified about the effectiveness of the Safe Route to School program and the need for increased funding to ensure children’s safety and health on the way to school.

There was also significant representation from people with disabilities and the elderly, who often cannot own or operate a car. One man said, “When you only have one choice, you have no choice”. Blind and wheelchair-bound people spoke to the need for upgraded vehicles, as some buses do not have lifts, and the long distances they must travel to reach a bus stop. Several people from the healthcare workforce supported these views, noting that thousands of workers and patients depend on transit for getting to the area’s many hospitals. One woman said, “Please, tax me more. Transit is important and I’m willing to pay”.

Amid chants of “Save our Metro!”, hecklers, and boos, infamous political activist Tim Eyman made an appearance and said the county’s “radioactive” and “corrupt” car tab fee should be abolished. He also said the forum’s attendance was not representative of the population, saying “normal people are at home recovering from a long day of work, but their voices deserve to be heard too.” Eyman’s definition of “normal” remains unclear.

Conclusions
In a format I have not seen before, the committee did not respond to any testimony or direct discussion but simply listened to the individual speakers. Perhaps this is why  a surprising range of transportation topics beyond the Metro service cuts were brought up, but it did highlight many problems with the Puget Sound region’s infrastructure. Congestion and poor road maintenance were common themes, but so were low-quality or lack of pedestrian and bicycle paths despite Seattle’s progressive reputation. A West Seattle man summarized it well, saying that in the face of climate change, unemployment, and transit dependance “it is literally insane” that municipalities and counties are underfunding the transportation necessary for dense and economically vibrant communities. One idea is to curb highway megaprojects, such as the SR-99 tunnel and SR-520 floating bridge replacement, and direct those billions of dollars more fairly and sensibly for the systems more people use.

Working in this region will come with the challenges posed by booming population and an era of cost cutting. But the event enlightened me to the amazing variety of perspectives and views that I don’t usually encounter and an appreciation of the challenges they will present when working as a planner.