Posted on October 1, 2015 by Scott Bonjukian

An illustration of how some of the HALA recommendations would shape neighborhoods. (City of Seattle)

The Seattle City Council is considering recommendations to increase the city’s amount and variety of affordable housing options. Over the past year, the Housing Affordability and Livability Agenda Advisory Committee (HALA) has been working to develop land use and housing program policies that will fulfill Mayor Ed Murray’s goal for 50,000 new housing units – 40 percent of those “affordable” – over the next 10 years. Here is a selection of the most important policies that will make Seattle more affordable for people of all incomes.

Seattle’s goals for housing production and preservation through the next decade. (City of Seattle)

HALA is seeking to address the type of housing shortage Seattle hasn’t seen since World War II; at best, the city produces 800 units per year that can be considered affordable for lower-income people. The mayor directed HALA to find solutions for people earning various fractions of the area median income (AMI). AMI is adjusted based on family size and established by the federal Department of Housing and Urban Development. Typically, a housing unit is considered “affordable” if its costs (rent/mortgage and utilities) are no more than 30 to 35 percent of the occupants’ combined incomes. Housing units could be anything from apartments to backyard cottages, duplexes, and townhouses.

The Seattle Office of Housing has summarized what local AMI and affordable rents are for its various programs, with one set of requirements in the graphic below. Consider the example of a couple making $43,020 per year – 60 percent AMI. Including utilities, an affordable 1-bedroom unit for this couple would cost $1,008 per month. They’d be hard pressed to find a privately-owned apartment for that low of a cost anywhere near the downtown jobs center or within easy walking distance of commercial services and transit. HALA aims to provide both public and private options so this couple and others like them can live closer to where they work and shop. 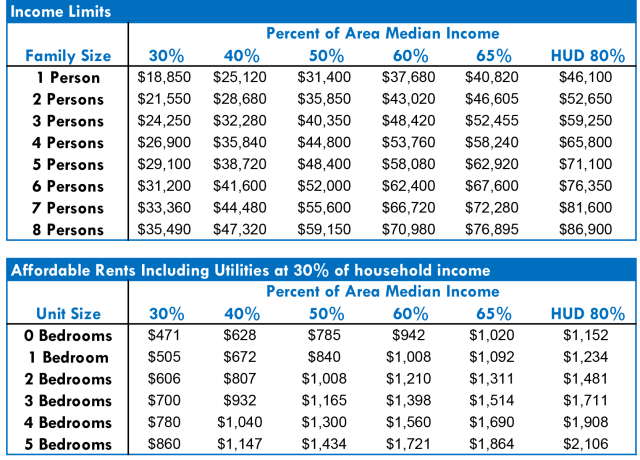 In the interests of community and equity, HALA organized its work around four key principles: generating more public funding for affordable units; increasing the quantity of available housing; support for vulnerable buildings, homeowners and tenants; and streamlining development and permitting processes. The final 65 recommendations, compiled in a 76 page document (PDF), are meant to be implemented as a package rather than individually. The 19 most progressive recommendations are summarized here, headed by their numbers.

R.1 HALA recognizes that the private development market is no longer producing affordable units on its own. It proposes raising building height limits in multifamily and commercial zones – enabling greater rental incomes for developers and property owners – in exchange for one of two options: designate 5 to 7 percent of their building’s units as affordable at or below 60 percent AMI for 50 years; or pay into a public fund that will be used to build affordable units elsewhere.

In commercial zones, developers could either add affordable housing to their project or pay into that public fund based on the size of their commercial building. The public fund contribution requirements, if chosen, would vary based on the value of the upzones and the type of construction. This policy alone would lead to an estimated increase of 6,000 new affordable units over ten years. This policy will be detailed in a post next week. 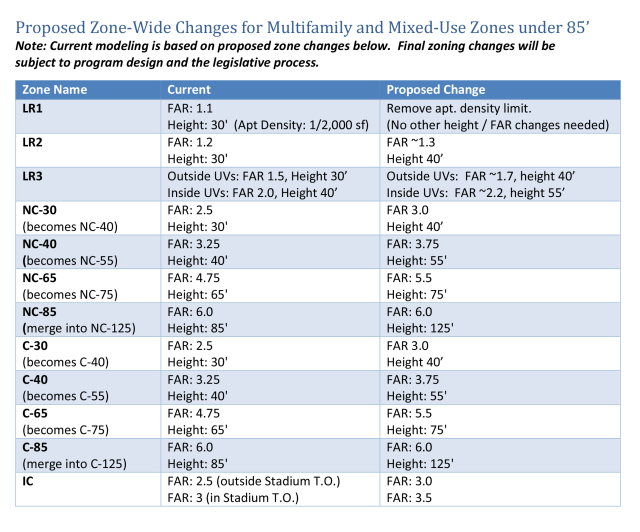 Where upzoning would change height and density limits. (City of Seattle)

Land use and zoning changes

L.1 Prioritize the use of underutilized and surplus public land for affordable housing. Where land is not suitable for residential development, HALA suggests using the revenue from surplus sales to fund affordable housing. Mandate that housing be built in on the same sites as new public amenities like libraries, community centers, and schools.

MF.1 Expand multifamily zoning in areas with amenities like transit service and schools, and to tie those expansions to mandatory requirements like those described in R.1.

MF.2 Expand the boundaries of urban villages, which are the areas where Seattle has been directing population and employment growth for the past 20 years while preserving outlying single-family residential areas. These areas are prioritized for infrastructure investment. It proposes expanding boundaries to areas within a 10 minute walk of transit service, and also around areas with schools, parks, and community centers.

P.1 Publicly acquire existing multifamily properties that are affordable for the the neighborhood but are at risk of redevelopment.

P.2 Make strategic public infrastructure investments in neighborhoods and cultural communities that are vulnerable to displacement. HALA says these areas should be targeted for economic development, parks, and transit funding.

P.3 Lobby the state legislature for a property tax exemption for private landlords who agree to income restrictions and rent limits, particularly where marginalized populations would most benefit. This would be targeted to properties most at risk for rent increases that will price out tenants.

R.3 Renew and double the Seattle Housing Levy that helps build and preserve housing, along with providing rental subsidies, for people at risk for homelessness, first-time home buyers, and extremely low-income households. Historically Seattle voters have approved this property tax levy five times, the last time being in 2009 for a $145 million levy that expires in 2016.

R.4 Renew and and expand the Multifamily Tax Exemption (MTFE) program. This program provides a property tax exemption to market-rate and nonprofit properties where at least 20 percent of units are affordable to renters at 65 to 85 percent AMI. HALA also suggests expanding the applicability of the MTFE to all multifamily zones, expanding the amount of qualifying unit types and promoting family-sized units, and pushing state legislation to permit the exemption to last more than 12 years

R.6 Lobby the state legislature to expand the State Housing Trust Fund. This fund is dedicated to people with special needs, seniors, and people with disabilities at or below 30 percent AMI.

R.7 Reinstate the City Growth Fund, which was originally established in 1985 to address the loss of low-income housing in downtown. It was created from new property tax revenues tied to new construction but was discontinued in 2002.

T.1 Pursue local legislation, education, and technical assistance to ensure fair access for people with criminal records. HALA cites data showing that 25 to 33 percent of U.S. adults have a criminal record, and they are disproportionately people of color with low incomes.

RP.1 Reform the Design Review and Historic Review processes. Builders and designers report that discretionary review by boards made up local residents adds significant costs and complexity to multifamily projects, with an average project taking 14 months from permit application to permit issuance. HALA suggests better two-way dialogue, training for review board members, and limiting the number of meetings.

RP.2 Raise the threshold for review under the State Environmental Policy Act (SEPA). HALA found that Seattle’s codes regarding environmental critical areas, shorelines, grading and drainage, stormwater regulations, and other codes address most of the issues in a SEPA review. HALA also finds SEPA has little effect on the outcome of construction projects and that it is used more to obstruct than promote sustainable development.

Concerned about the way these recommendations will affect your neighborhood? Or do you think some policies aren’t strong enough? The Seattle City Council is currently taking public comment on the HALA recommendations. Contact the Council at council@seattle.gov. Future updates on The Northwest Urbanist will cover public feedback and the movement of these policies through the political pipeline.

This is a cross-post from The Urbanist, originally published September 8, 2015. Some edits were made to reflect updated information.