The Case for a Wallingford Crossing

Looking south from NE 50th Street to NE 45th Street. A ped-bike bridge could cut this divide in half.

Interstate 5, like freeways everywhere, is a real barrier between Seattle’s U-District and Wallingford neighborhoods. Currently there are only four street connections between the two, down from 12 before the freeway was built.  Recent discussions at community meetings have brought up the idea of a pedestrian-bicycle bridge over the freeway at 47th Street, which is identified in the city’s Bicycle Master Plan (BMP) as a catalyst project and part of a major neighborhood greenway. The bridge could greatly improve the local and citywide pedestrian and bicycle network.

The BMP defines catalyst projects as “…located at significant choke points in the network that pose challenges to implementation due to infrastructure physical constraints…These projects are likely to be expensive, but are very important for network connectivity” (BMP Appendix 8B). But just because a 47th Street bridge is listed in the BMP doesn’t mean it’ll get built any time soon; in fact, the 2014-2019 Neighborhood Greenways work plan does not list it nor the east-west greenway for implementation. Greenways are neighborhood streets (shown in green below) designated for ped-bike safety improvements, such as speed bumps and new stop signs or traffic signals.

This is partly because the BMP’s many miles of bike lanes (orange), cycle tracks (blue) and off-street trails (red) are supposed to be distributed and constructed throughout the city in an equitable manner. Another factor is the availability of money, and unfortunately most transportation funding at all levels of government still goes towards moving cars. Indeed, that’s the (literally) uphill battle that University Greenways is facing as it pushes the Seattle Department of Transportation to extend the Roosevelt protected bike lane further towards the 65th Street terminus of a repaving project, though going at least to 47th would help riders get through the dangerous intersection at 45th and connect to the eventual bridge.

The proximity to the University Playground could instead make the bridge open for parks funding, which will be ample when the Seattle Parks District starts collecting taxes in 2016. And it could be built sooner if advocates emphasize its importance to the 45th Street light rail station, to open in 2021. The bridge would enable Wallingford and Fremont bicyclists to more safely access the station and the U-District’s commercial center. The BMP indicates no plans for 45th or 50th Streets, two high-volume arterial roadways that cross I-5 nearby but only have standard sidewalks and no bicycle facilities. An east-west greenway is planned for a long stretch of 47th Street, but it also won’t be implemented anytime soon. However, 47th is already a low-traffic street and its intersection with the Brooklyn Avenue “green street” (a greenway with lots of plantings), which is planned for construction, will provide a logical and comfortable route.

The project is similar to the Northgate Pedestrian and Bicycle Bridge (above) that will span I-5 and connect the 103rd Street light rail station, set to open at the same time, with a 1.1 mile east-west greenway that is to be built in 2017. Additionally, the station at Husky Stadium will be connected to the Burke Gilman trail via a new ped-bike bridge. The $25 million Northgate project is only partially funded; Seattle and Sound Transit have each committed $5 million under a self-imposed deadline of July 2015 to find the rest. Seattle City Council member Mike O’Brien and King County Council member Larry Phillips, both on the Sound Transit board, are calling to ignore that deadline and continue to pursue federal grant money.

This provides a starting point for estimating the cost of the 47th Street bridge, which must cover 550 feet between 5th and 7th Avenues. The Northgate bridge will be between 1,800 and 2,200 feet long; the higher estimate is $14,000 per linear foot. The concept below is about 800 feet long, which comes to a rounded estimate of $12 million. 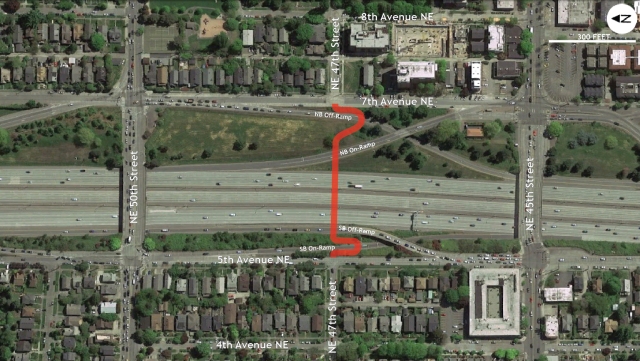 The length of the bridge will be dictated by the four off- and on- ramps at this location. Although they’re below the adjacent streets, it appears a straight and level bridge would have too little vertical clearance. The state transportation department is unlikely to resolve this by prohibiting trucks or lowering the ramps. So, the bridge will need to be angled, and the slope is limited by the needs of cyclists and and mobility-impaired people. The extra length can be accommodated by wrapping the bridge around itself or by extending into 47th Street. The latter would present issues for residential access and height clearance on the avenues.

Another possibility that residents have mentioned is capping the freeway between 45th and 50th, similar to the idea to lid I-5 in downtown. It’s an equally valid strategy to bridge the massive gap and create needed open space, but it is a much more ambitious project that will take time to organize. My best guess using Google Earth puts the site at 14 acres. A ped-bike bridge is comparably simpler and can be done in time for the arrival of light rail. If you live in the neighborhood, reach out to local officials and ask them to get this project done sooner rather than later.

12 Responses to The Case for a Wallingford Crossing