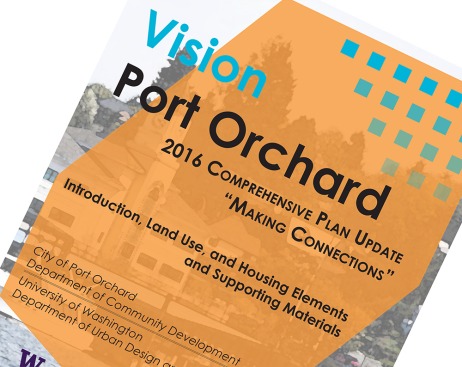 Earlier this month myself and a team of graduate students finished helping update the City of Port Orchard’s Comprehensive Plan. ‘Comp’ plans are at the core of the planning profession and (ideally) guide everything else that planners and city leaders do, from development regulations and zoning to capital projects and social programs. Many other communities around Washington State are working to update their plans over the next few years; this is a primer on what comprehensive plans are, a summary of my experience working with Port Orchard, and why should get involved with planning efforts.

The comprehensive plan, also called a ‘master’ or ‘general’ plan, looks roughly 20 years into the future. It contains broad statements of a community’s vision of their future, and then list goals and policies to achieve that vision. Hard data can be included, such as forecasted population and job growth and how much land is needed to accommodate that growth. Other details like park acreage, traffic counts, and tax revenue can provide background information. Maps, photographs, and charts are often included to illustrate ideas. Good plans are readable by the general public, informative and helpful for city leaders, and brief enough to be accessible.

Planning became a widely accepted practice in the United States about 100 years ago. Previously, planning had been done piecemeal by architects, landscape architects, and civil engineers; today, the collaboration of these professions is still important, but planning became its own profession in response to problems posed by industrialization and rapid urbanization. In the 1920s the U.S. Department of Commerce published standard enabling acts that became templates for states to authorize their cities and counties to formally plan. These acts also authorized the creation of zoning regulations, controls for private land subdivision, planning commissions, and regional governments. Amid the problems of industrialization and urbanization, early plans primarily addressed public nuisances (pollution, noise, traffic, etc.) through zoning and land use policies. In the decades since, other major public concerns, such as  transportation, have also become a large element of comp plans. Other common elements include housing, parks, utilities, capital facilities, the environment, and economic development.

A diagram of how land use connects to everything else.

Because of the uncertainties that are inherent in city governance and economic cycles, plans typically do not have legal teeth and don’t need to be strictly followed. But, their creation and contents can be used to justify city regulations and actions. Perhaps the strongest connection between long range planning and current issues are zoning/development regulations and the capital improvements plan (CIP). Regulations on the types of uses for private land (residential, commercial, parks, etc.), along with specifics (building heights, parking requirements, energy efficiency, etc.) are constantly tweaked in accordance with the public’s desires and the need to wisely utilize scare land resources. The CIP is a constantly-updated list of projects that need major funding, such as school additions, bridge maintenance, new water mains, or transit extensions (as opposed to ongoing funding, such as street repair and staff salaries); CIPs should prioritize projects and their funding by referring back to the comp plan.

The most important part of planning is not the end product, but citizens’ involvement in building a common vision and connecting with local government. Early and continuous public participation in the planning process is key to building a good plan. Some level of opportunity for public comment is legally required for most planning activities, but its good practice anyway. In addition to traditional public meetings at city halls and focus group events elsewhere in the community, planners are increasingly taking advantage of online tools to increase people’s chances to voice their opinion. Gathering feedback about communities’ future shouldn’t just happen during occasional plan updates, but also on a regular basis for current issues.

Many states require counties and cities to plan. Washington State began this rather recently in 1990 with the Growth Management Act (GMA). The GMA was created in response to rapid urban growth in the 1980s that led to extensive sprawl throughout the state; sprawl is the low-density, car-dependent, single-use opponent of urban planners. Sprawl has many documented ills, such as social isolation, degraded human health, and increased pollution. It also an extremely costly use of public dollars, because spreading out people means many more miles of pipe and roads are needed. Among combating sprawl, the GMA aims to protect resources like forests and farms while protecting property rights and establishing a formal system of planning. Amendments to plans can be approved annually, but full updates are required every 8 years with certification by the state and/or a regional planning agency.

Readers who reside in Washington State have an opportunity to voice their thoughts right now. The GMA requires updates every 8 years, and the next interval is somewhere in the span of 2015-2018 (depending on the county). Plans usually take about two years to update, so your community is probably in the midst of an update right now. This is the impetus that led to my hometown, Port Orchard, contracting with the UW’s Department of Urban Design and Planning to kick off their update process. The fact that I was enrolled at the UW at this time is a happy coincidence, and I had a great time working on the project. 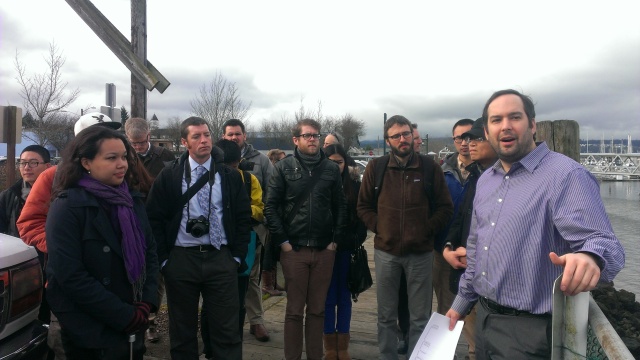 The team visits Port Orchard for the first time and hears from Nick Bond, right, the City Development Director.

Our scope of work was to assess existing conditions, draft a public participation program, and update the introduction, housing, and land use chapters of the 2008 plan. We began in January by collecting as much data as we could about the city and compiling it in an Initial Conditions Report (PDF warning), with summaries of everything from employment characteristics and housing stock to water systems and roads. Having grown up there, I focused my research on the local school system. The report helped guide our first public meeting in early March, where we presented our findings and asked residents what they value about Port Orchard and how the city should respond to future challenges. 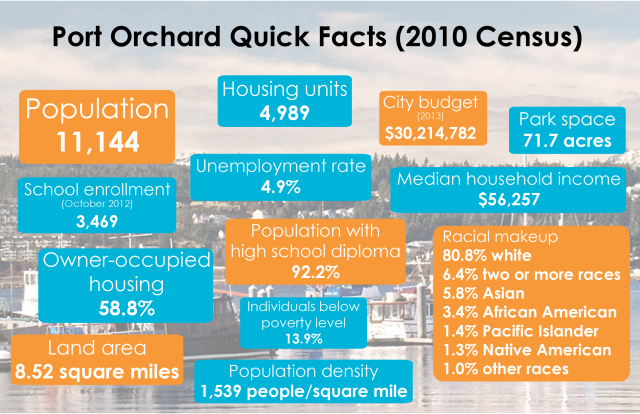 A introductory graphic from the plan.

With that feedback, after spring break our team reassembled to focus on targeted outreach. We met with the school district, rotary club, business owners, and many others. Key issues we heard were preserving a small-town character and the low cost-of-living while increasing employment opportunities and transportation options. All of this will be challenging; Port Orchard’s current population is about 12,000, and if population projections are met it could be well over 20,000 by 2035. The city is already having trouble paying for infrastructure maintenance. This led to the idea of consolidating future growth in “centers” to preserve open space and neighborhoods.

The team at work in studio at the UW.

Some centers are already designated by Kitsap County, but this strategy calls for actual implementation of zoning changes and the city’s cooperation with developers. Centers would be located around major intersections and consist of mixed residential, commercial, and civic space, with connections to bicycle paths and transit lines. With higher population density than the rest of the city, centers could effectively absorb future growth. To further this idea, we came up with the theme of “connections”. In 20 years Port Orchard is envisioned as a place with strong connections between people, the built environment, neighborhoods, history, government, business, and everything else. That idea filtered down through the rest of our work.

The conceptual structure of the plan when it is completed in 2016.

We went beyond our scope of work even further by crafting a civic engagement strategy and an action plan I wrote for improving the city’s extensive waterfront. I also contributed by administering a hefty online survey that got a decent response rate (takeaway: get on the social media bandwagon) and provided a trove of information for city officials. It also confirmed much of what we had heard from talking to individuals.

On June 5th we completed our work with a presentation (PDF warning) to the City Council and Planning Commission, with a good number of the public in attendance (video here, starts at 7:50). Feedback was overwhelmingly positive, with praises for our efforts to improve the city’s connection with citizens and the professional level of work. We also introduced new graphic elements to the plan that can be adopted as staff work on other chapters over the next two years. I might be one of those staff if I continue on as an intern with the City. Our final product can be viewed here (PDF warning). 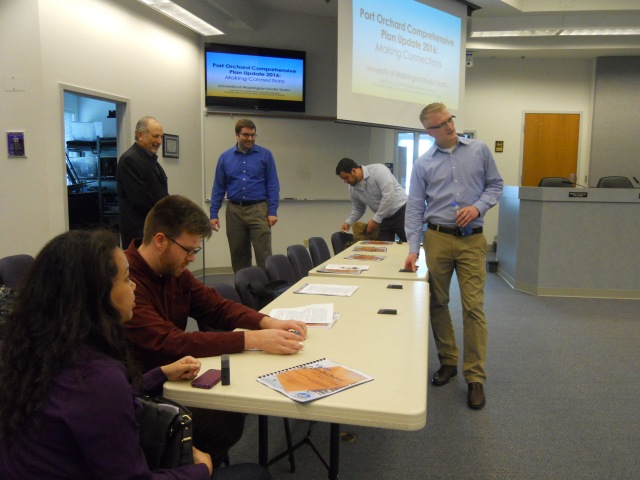 The team prepares for its final presentation to the City Council and Planning Commission.

While you may not be a practicing planner, there is plenty of opportunity for you get involved with your city. I have already attended numerous events on Seattle 2035, which is that city’s process for updating its plan by next year. There is an upcoming opportunity in this process on June 24, 5:30pm-8 at Seattle Center, to see what issues have emerged and how the conversation should continue.

If you’re not in Seattle, you can check here to see when your community needs to update its plan by and click here to find a listing of communities’ plans. Check out the existing plan and see what has changed since it was written, or what you think should be different. Contact your local planning department to voice your thoughts and find out when the next public meeting on the plan is. Sign up for monthly newsletters and alerts of the next council meeting; there is nearly always an item on the agenda related to land use and planning. If you’re not one for public speaking, ask your city to setup an online forum or a participant tool like MindMixer. Online tools are are a great way to reach people who would not typically show up at public events because of busy lives.

Today, planning is more than just a technical practice. Planners have the responsibility to engage with people affected by their decisions and offer the best solutions to elected officials. And it’s important for local governments to hear from a wide spectrum of citizens so that the best decisions can be made with limited land and monetary resources. Get out there today and make sure your community is the best it can be tomorrow.

3 Responses to The Comprehensive Plan