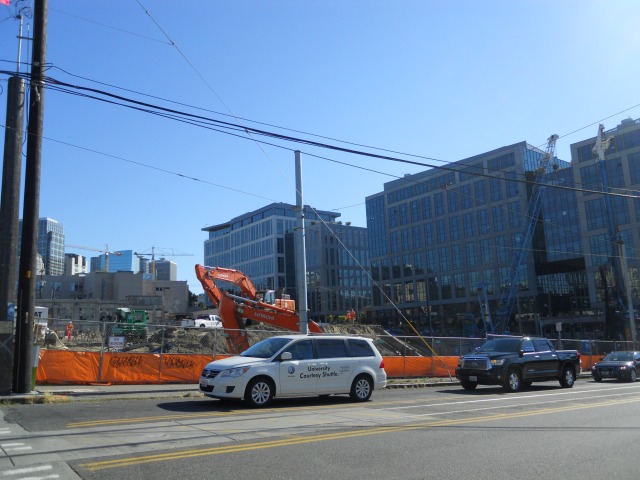 Last week I led a tour of students and professors from the University of Munich’s Department of Geography through South Lake Union (SLU) . It was a great experience for me, as I’ve never done anything like it, and the German group got to see the city’s most rapidly evolving neighborhood. Their primary studies are in the economics of geographic tourism, but among the mix of undergraduate and graduate students some were more interested in ecological design, urban planning, or related subjects. In our brief walk through the neighborhood we also had an enlightening discussion about the differences between American and European cities and culture.

The students were on a two week study trip, starting with a visit to Vancouver, B.C. and ending in Seattle. Leading the trip was Dr. Phillipp Namberger, who found my blog through Colin Marshall’s article at The Guardian, and Dr. Thomas Hüttner. They were primarily interested in how urban corporate campuses have spurred change in the neighborhood, and previously had visited the Microsoft campus in Redmond as a counterpoint.

We started at Westlake Park, the city’s “town square”, and I discussed what makes it a successful downtown park. The surrounding food and retail help draw people in, while shady trees and a multitude of places to sit help keep them there. The water feature and decorative landscaping are a plus. I also discussed the city’s “privately owned public open space” (POPS) program, which is a program that encourages developers to provide public space in exchange for higher height limits (Stephen Fensler at The Urbanist wrote about this). Understandably, there was some confusion about about who pays for maintaining such spaces and when the public is allowed access; I previously wrote about my uncomfortable experience at downtown’s 17th floor roof garden. I told them to remember this active space as we traveled to SLU.

From there we walked to the SLU Streetcar. Along the way I pointed out the Seattle Monorail station and mentioned that there is yet another effort to expand it into a citywide transit system. When asked why I thought that was a bad idea, I said that monorails are an outdated technology and we are already invested in building out a regional light rail system with years of planning.

At the streetcar stop we encountered a bit of a hiccup when Philipp realized he would have to pay 20 times to get paper tickets for the entire group. We tried to pay the operator directly but she slyly let us on board anyway. I was told that that fare payment in Germany is seamless and allows large group purchases, which highlights that American fare-payment is still lagging. The problem would also have been solved if each person had ORCA cards, but ORCA doesn’t offer a multi-day pass nor are the cards physically sold anywhere but in the downtown transit tunnel. It was late morning as we pulled out onto Westlake Avenue, so traffic wasn’t too bad. I mentioned that Seattle is working on expanding its streetcar system, but some students commented on how strange it is that just this single line was built to start with.

The terra cotta facade of an old building is being preserved for the Troy Block redevelopment.

When we got off  I started by leading the group into part of the neighborhood that hasn’t been as touched by redevelopment. Old warehouses, single family homes, and apartment buildings remain just a few blocks from the bustling Amazon campus. There’s even a P-Patch and a mid-sized community park. But sprinkled throughout the area are new condos and apartments, and the ambient noise of nearby Interstate 5 is constantly broken by the din of multi-story construction projects at every turn.

Seattle is only about 150 years old but is now grappling with questions of historic value and how to preserve past artifacts of the built environment. I’m told it’s another issue altogether in Europe, where the cities are hundreds or even thousands of years old (related video on building in London). Asked later whether I thought the neighborhood is gentrifying, I said no; from my understanding, SLU was mostly made up of industrial businesses and decaying office buildings before new life began pumping in during the late 1990s. I think the changes are positive and a better use of scare land resources. Several people who work or live in the neighborhood have told me that they like the increasing amount of restaurants, transportation options, and other amenities.

Terry Street is unique among commercial streets in Seattle.

When we finally entered the Amazon campus, I spoke about the unclear distinction between private and public space in this development. There are several places where Amazon has developed an entire block but has retained a pedestrian path or public space through the center. There is no signage indicating Amazon is headquartered here, and there are no barriers or security guards that prevent passerby from moving through. Whether this is good or bad is up for debate, but is interesting in a country with a culture of strong property rights. The line between public right-of-way and private property is also unclear on Terry Street, where the streetcar runs in one direction. The street has been significantly upgraded with new pavement, vegetation, seating, bike racks, and back-in angled parking that calms traffic. From our perspective, it was difficult to say if the city or the adjacent property owners had paid for these improvements.

Terry leads straight to Lake Union Park, which was our final destination. I mentioned Seattle Commons, which was a proposed park that would have been built across the entire SLU neighborhood. In the 1990s voters defeated a levy that would have funded its construction. Instead the modernist Lake Union Park opened in 2000 and possibly heralded the area’s transformation from a gritty industrial district and into a cluster of information and bio-technology companies. Notable organizations such as the Bill and Melinda Gates Foundation and the Fred Hutchinson Cancer Research Center have built their headquarters here. Recognizing the transformation early on, in 2004 the city published a neighborhood plan that encouraged continued redevelopment with zoning changes and transportation investments; stemming from this is the yearslong “Mercer Mess” rebuild of a cross-town connection to Interstate 5.

We also peeked inside at the Museum of History and Industry, which is located within the park in an old naval armory. The museum relocated there in 2012 when it’s Montlake location was threatened by the reconstruction of the 520 floating bridge, another example of freeway projects significantly affecting urban life. But its lakeside location and exhibits offer poignant examples of Seattle’s maritime and aviation history; as a seaplane took off, I told the group that while Seattle has a burgeoning white-collar population of office workers and innovators, it has still held on to its blue-collar workforce with a variety of shipping and manufacturing businesses in South Seattle, Sodo, Ballard, and Interbay. The region is home to Boeing, one of the world’s top aircraft manufacturers, and the largest passenger ferry system in the United States. 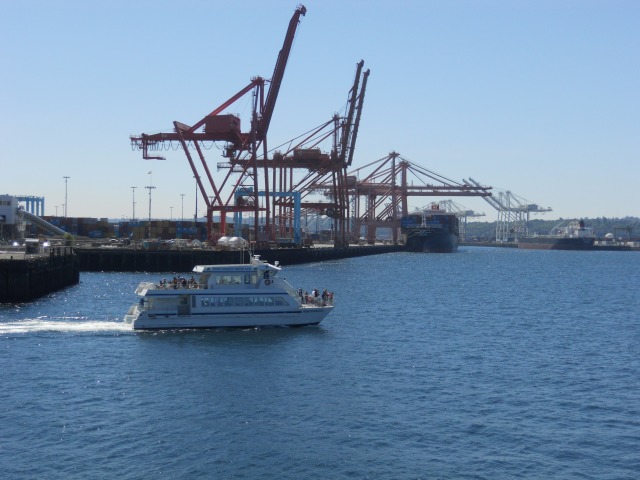 Seattle has a vibrant mix of commercial and industrial character.

During lunch at a nearby restaurant I was interested to learn from Philipp and Thomas that many geography students go on to work in a variety of fields, ranging from market research to forestry and automotive manufacturing. People with spatial and statistical analysis skills can contribute to a variety of areas. Geographic information systems (GIS), a tool commonly used in city planning, also has applications at the national and continental scales.

Soon we parted ways, each party having learned from the other. It sounds like the students and professors had only great experiences during their trip, and I was glad to make a small contribution. As a Seattle-centric writer, I realized it can be easy to get bogged down in the fine details of projects and issues in one area, but the rest of the world is humming along in very different ways. I hope to soon gain new views on urbanism by visiting the cities of Europe, and my first stop will be in Munich.